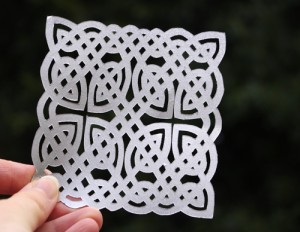 This article is cross-posted from my school blog, Spring 2012.

Let me paint you a picture. You’re a teacher of 2nd graders, and one morning you walk in to the classroom and one of your young boys is already sitting at his desk, quietly, intently working on something. You walk over to his desk to see that he is making some incredibly ornate paper cut outs (like the découpage on the left) using a very sharp X-Acto Knife. He’s wielding the knife masterfully: he knows exactly how to hold it, how to protect his desk, how to manipulate the paper under the knife, and he knows where he wants it to go. While you marvel at his creation (which is way better than you could do yourself, you admit), you think to yourself, “Egad! This second grader is playing with X-Acto knives! This is too dangerous! I must squelch this dangerous behavior NOW!” (Yes, you just thought the words “Egad” and “Squelch,” get over it.)

Now, replace the notion of “paper cut outs” with “Facebook” or “Twitter.” Maybe not second graders, but many of our students come into our classrooms already masterfully wielding social media tools. They know how to use them better than you, and are most definitely more qualified to teach it to the other students than you. They understand the security flaws (and likely just ignore it), but they are masters at manipulating their profile until it is a work of art, ready to be admired by friends and onlookers. However, just like the boy with the X-Acto knife, we tell these students that these social media tools are “Too Dangerous!” and squelch that behavior as well. Are there some students who do not handle the social media tools well? Absolutely. Are there some second graders who should not be within ten yards of an X-Acto knife? Of course. But instead of helping those who lag behind to catch up to those who wield the tools well, we just take all the X-Acto knives away and hand the children some nice safety scissors.

The people of the United States used to be characterized by the rough, tough, frontiersmen of our early history. We weren’t afraid to get dirty, and we definitely didn’t shy away from things because they were “Too Dangerous!” Our history books are filled with men and women who did things 100, 200, 300+ years ago that would never fly today because they’re simply too dangerous. While it may be a slippery slope to say that learning social media tools will lead to reckless behavior such as conquering a land inhabited by “savage” natives, helping operate an illegal network of human trafficking, or instigate civil revolutions, let’s look at our own context here: our children don’t play outside anymore, bacteria are growing smarter because of the copious amounts of antibiotics we use, and kids can’t learn to ride a bicycle without full riot gear.

So my question to you is, how long until we stop worrying about how dangerous something is, and instead teach our children to be masters of their own fates, to use all tools in a masterful way, watch and see what beautiful creations emerge on the other side?

Permanent link to this article: http://www.edtechfor.me/2012/03/too-dangerous/